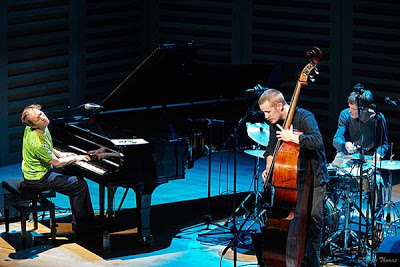 Fresh from their appearances at Sheffield Jazz and Wakefield Jazz earlier in the week, the trio concluded their Northern dates at The Venue, Leeds College of Music. With their set-up occupying only a fraction of the stage, the trio appeared, Django in his trademark hat (and not-so-trademark ski gloves...), and without introduction, launched into a gig brimming with energy, creativity and musicality.

The first set opened with a Parker tune, Scrapple From The Apple - using fragments of the well-known melody as springboards for their own improvisations. It is clear how well the trio know each other (playing free together every week for 2 years before Django started writing material). The result is a band that works exceptionally well as a unit and one that can lead an audience through complex and adventurous music with ease. They continued with Star Eyes, this time letting the melody exist almost in its entirety, framed by the arrangement and wandering off into a groove which bassist Petter Eldh solos over before it fades away.Their third time nod to Parker came with Billies Bounce before they moved onto one of Django's originals - Peonies, As Promised.

Rhythm, odd-metre playing and metric games are dominant forces in the trio's group voice. Equally dominant is joy; the band communicates lightness and joy in their music at all times (Little Suede Shoes features impromptu whistling, both collectively and solo), which is reflected in their audiences. The first set closes with another Bates original, Sadness All The Way Down. This one takes the audience on another adventure, which the lights reacting to the music, at one point leaving band and audience in absolute darkness. Before they play, he explains the story behind the piece - of a crane operating school situated near to a house owned by drummer Peter Bruun. As the set ends, I'm left thinking - Django is the type of person one wishes to sit down with and talk to at length about all things.

Their second set features another two originals by Bates and a further 5 Parker tunes. In Confirmation, Django stretches out, the band moving between frenetic and high energy to slow swing. Each piece seems to move into multiple directions but there is method to the madness. Ah Leu Cha showcases yet another of the bands collective talent - singing. The trio sing together, gradually moving back to playing, leaving only Bates left to sing (soft and childlike, with a range rather surprising in a grown man...). Reworkings of Donna Lee, Now's The Time, Moose The Mooch (the only Parker tune on the album not arranged by Bates) and Hot House sit alongside Bates' Senza Bitterness (which he explains refers to his time working with Tim Whitehead) and We Are Not Lost, We Are Simply Finding Our Way. Bates, Eldh and Bruun are three musicians who complement each other very well and all three shine in this setting.