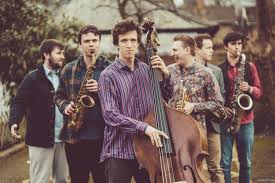 Double bassist, composer and winner of the 2014 Kenny Wheeler Prize Misha Mullov-Abbado will launch his new album, Cross-Platform Interchange on Edition Records this month and will tour England between 15th and 26th July.

Winner of the 2014 Kenny Wheeler Jazz Prize, Misha Mullov-Abbado is an in-demand bass player, composer and arranger based in London. He is a 2014 City of Music Foundation Artist and recently released his debut album New Ansonia consisting of all his own compositions performed by his quintet on Edition Records, which has been included in “Best Jazz Albums of 2015” by The Telegraph and BBC Radio 3 and been extremely well-received in newspapers and magazines across Europe. As an experienced band-leader but also a versatile sideman Misha has performed at many of London’s top venues such as Ronnie Scott’s, the Vortex, 606 Club, Pizza Express and Royal Albert Hall’s Elgar Room (as part of the BBC Proms Late series), as well as venues in the rest of the UK and Europe. Having won the 2014 Dankworth Prize for jazz composition Misha is an experienced composer and writes for various jazz groups as well as classical soloists and ensembles, and is influenced by a variety of jazz, classical and pop music.

The final three dates of the tour will bring the ensemble to the North, visiting Manchester, Newcastle and Sheffield.

Misha is joined by James Davison on trumpet, Matthew Herd on alto, Sam Rapley on tenor, Liam Dunachie on piano and Scott Chapman on drums.