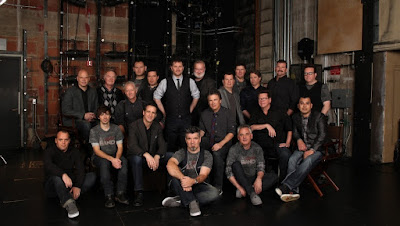 An additional date was added due to popular demand so there are now two opportunities to see the band - at 4pm on Sunday 25th June and then at 7.30pm on Monday 26th June.


Even for a successful composer and arranger in Hollywood, Gordon Goodwin’s numbers are impressive: A 2006 Grammy Award for his instrumental arrangement of Incredits from the Pixar film The Incredibles, three Emmy Awards, and thirteen Grammy nominations.
There are eighteen musicians in Gordon Goodwin’s Big Phat Band, one of the most exciting large jazz ensembles on the planet. Populated by L.A.’s finest players, the Big Phat Band takes the big band tradition into the new millennium with a contemporary, highly original sound featuring Goodwin’s witty, intricate, and hard-swinging compositions in a veritable grab bag of styles: swing, Latin, blues, classical, rock and more.
Established in 2000, the Big Phat Band’s debut recording, Swingin’ For The Fences (Silverline Records), featured guest artists Arturo Sandoval and Eddie Daniels. It made history as the first commercially available DVD-Audio title ever released and the first DVD-Audio title to receive two Grammy nominations.
Tickets cost £32 and these gigs are sure to be well attended, so audiences are advised to book soon. For more information and book tickets, visit the RNCM website.
Posted by Editor at 04:21