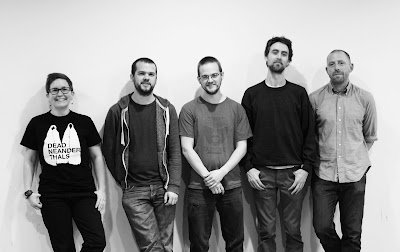 Sloth Racket release their second album, Shapeshifters, on 12th June on the Luminous label. To accompany this release, the band are embarking on a 6 date tour of the UK including a gig at Sproggits, the jazz and improvised music night run at Wharf Chambers in Leeds.


To launch the album we’re heading out on tour at the end of June, with support from Arts Council England. The tour takes us to some new places, perhaps the most exciting of which is the first ever edition of Listen! in Cambridge. Listen! is being set up by dedicated London jazz scene supporters Carol Garrison and Graham Lee, who have relocated to Cambridge and decided to get their hands dirty setting up a new outpost for adventurous music there. As well as Cambridge we’ll be playing in Bristol and Norwich for the first time, plus returning to Leeds and Brighton to play at Wharf Chambers and Safehouse. To start things off we’ll be doing a set on the Saturday of the second LUME Festival, which presumably you’ve already got your tickets for…
Here’s the tour itinerary, with links to more info on the gigs:
24th June London: IKLECTIK (LUME Festival)
26th June Leeds: Wharf Chambers (presented by Sproggits)
27th June Bristol: The Old England (presented by Pull The Strings)
28th June Brighton: The Verdict (presented by Safehouse)
29th June Norwich: York Tavern (presented by Plink Plonk)
30th June Cambridge: Unitarian Church (presented by Listen!)
Posted by Editor at 06:31