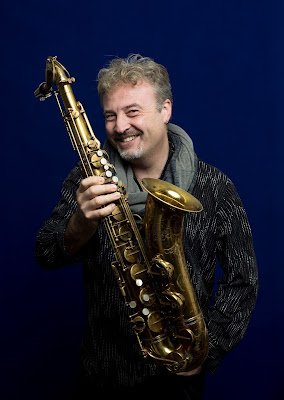 Tim Garland has been described as a world-class jazz improviser, one of the most versatile musicians in the UK, and even a living legend. The ‘honorary northerner’ speaks to Ann Chadwick on the run up to his appearance at Harrogate International Festivals.
Harrogate International Festivals present the Tim Garland Electric Quartet on Sunday 2nd July, 7.30pm at the Crown Hotel, Harrogate. Visit harrogateinternationalfestivals.com to book, Box Office: 01423 562 303.
“Some people think that I moved to America, but I never did – I just got off at Newcastle,” Tim laughs, speaking from his home in Whitley Bay, with a view of the sea.
People thought he’d gone stateside after the American jazz icon Chick Corea invited Tim to join his band in the late 1990s, after Tim’s earlier collaborations with artists such as Ronnie Scott and John Dankworth. “I had no idea, when I first started out, I’d end up joining Chick’s band, it really was a dream come true.”
Despite having a home in London for easier access to Heathrow airport, Tim bought a home in the North East 13 years ago to bring his children up outside the big smoke. He wrote compositions for the Royal Northern Sinfonia when the Sage, Gateshead, just opened and the Arts Council was keen to encourage more creativity in the regions.
The juxtaposition of the north of England’s coastline and American jazz scene, mirrors Tim’s own yin and yang approach. Famed for his improvisation, he’s also loves composition, studying classical music and jazz at the Guildhall School of Music.
“I was already playing the piano and I loved composing and making things up but I didn’t have the patience to write it all down,” he laughs. “I was immediately taken by the rhythmic propulsion and the excitement and the spontaneity of jazz, you know, every time you played something it could be different and you didn’t need to write everything down. Perfect for me! I threw myself headlong into it. So there were these two aspects to me that continue right to this day. The love of something structured and written down, like writing a novel I suppose, against this absolutely unpredictable, very sociable, fun way of making music. The two are like my two arms, I don’t favour one against the other.”

It seems unlikely for a lad born in Essex to embrace the genre most synonymous with 1920s black America; a genre also famously mocked for its black polar neck vibes on comedy sketch shows like the Fast Show. ‘Jazz…nice!’ It’s a prejudice Tim hopes people check in at the door.
“Jazz comes with a lot of cultural baggage for most people,” he says, “you imagine it’s played at 2am in a speak-easy somewhere in New York,” Tim says. “The history of jazz is bound up with this nocturnal life - prohibition, America, racism – it’s a funny old word really, jazz, a lot of jazz musicians don’t even like the word, because it’s so culturally and politically loaded, but actually it’s the music of freedom.”
Moving to Canterbury aged two, he grew up in the presence of local saxophonist Tony Coe who played the famed theme on the later the Pink Panther movies. “He was one of the first guys I heard live.”
The power of a live performance is something Tim is passionate about.
“As an artist you don’t separate things out – this is science, this is music, this is politics – you try to live a holistic life. You bring all that onto the stage with you, and present yourself as a living human being. I like to say to people who aren’t used to hearing instrumental music live and they’re wondering about whether coming to the gig, it’s rather like seeing a play as opposed to a film. There’s something so immediate and real and organic about seeing people play and improvise right in front of you. It can be an electric experience. There’s a tightrope walk, that potential for things to go in a different direction or even go wrong, and you think ‘wow this is live, this is real, this is vital’. It hasn’t gone through months and months of post-production. It’s a never repeated thing. That kind of spontaneity I think is perhaps something we need a little more of in our lives now, everything is so pre-packaged.”
Jazz as a genre is packaged into sub-categories: electric, avant-garde, smooth. Tim, not one for categorisation, is best known as a lyrical player, but has worked with all styles guesting with players such as Jeff Lorber.
“My latest album, One, is a celebration of human unity which is why we called it One. Much of it is melodically driven. Call me old fashioned but I love melodies and I think audiences do too, whatever they think about jazz, if they can hear something that is beautiful to them they’ll be drawn into the narrative. You can be experimental and unpredictable and throw all sorts at the audience but if there’s an underlying soulfulness, then that’s the way to really reach people.”
It definitely reached people. One received huge critical acclaim, and was last year’s Jazzwise Album of the Year; Tim was also nominated for the 2017 Jazz FM Instrumentalist of the Year Award.
The acclaim is something he shoulders with both gravity and humour. “I’ve just turned 50, you get a fair a bit of acclaim just for hanging in there,” he laughs.
“For the first half of my life I was totally absorbed in music. Now I’m older, I enjoy other forms of art like plays and films. I’m also drawn more to spirituality, talking about unity. In the end you keep asking yourself these questions. How can I be of best service? I’ve been lucky enough to do what I love for a living - what can I do to make sure I best communicate this music?”
“You get a bigger sense of perspective, especially after travelling the world so much. Over the years I’ve grown more and more towards this sense of responsibility as artists to celebrate our unity.”
The band features Asaf Sirkis on drums and Sting’s pianist for many years, Jason Rebello, as well as newcomer guitar-maestro Ant Law.
“Jazz is so generous in its inclusivity, for example you may have some flamenco or African elements - you’re free to incorporate these global influences. I don’t think any other form of music is so inclusive. Asaf is a great virtuoso drummer from Israel who was brought up with Middle Eastern rhythms, and I love to incorporate those. Jason worked for many years as Sting’s piano player travelling around the world – his influences are different again – he was steeped in people like Stevie Wonder growing up.”
For those who are a bit scared by the word jazz, Tim insists it is in fact the perfect music to unify all of us.
“It’s a great way of getting out of the thinking mind. Therein lies our unity - that’s the paradox because some people are turned off jazz because it’s too intellectual but when it’s done right you don’t have to understand it in that way. If the overall sound is beautiful you don’t have to understand – "ooh he’s playing a minor ninth" – if the sound itself is beautiful and the soul comes across, it speaks to absolutely everyone.”