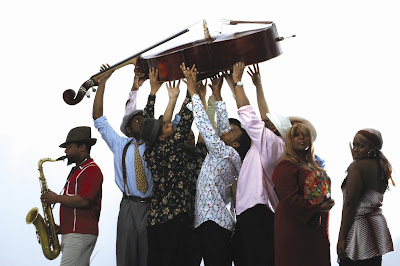 One of the UK's best loved ensembles is playing at Howard Assembly Room in Leeds on April 26th.


Breathtaking stuff. Britain has its own rival to the Buena Vista Social Club. See them now before the rest of the world grabs them. - The Guardian
From the Howard Assembly Room website...
In 1991, inspired by the rhythms of traditional Jamaican music and the largely improvisational nature of jazz, leading double bassist Gary Crosby turned a musical concept into a joyful reality. His vision - a fusion of mento, ska, reggae and jazz, classic and modern jazz standards alongside Jamaican folk songs - resulted in Jazz Jamaica.
Since then, a stream of talented young jazz musicians have joined the Jazz Jamaica project. For Leeds International Festival, the 10-piece version of the band brings their exhilarating, spontaneous sound to the Howard Assembly Room.
Tickets cost £18.50 and can be booked on the Howard Assembly Room website.
Posted by Editor at 08:02