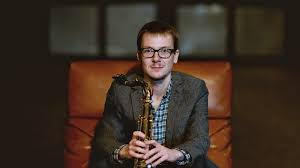 Congratulations to saxophonist and LCoM alumnus Matt Anderson who was this week announced as one of the winners of the 2017 Dankworth Awards.

Also announced was the 2017 Eddie Harvey Arrangers Award, which this year goes to Tom Green for 'Badger Cam' and Jacky Naylor received the runner up position for 'Stockholm'.

"The winning pieces will be performed by members of the GSMD Jazz Dept under the direction of Scott Stroman and Malcolm Edmonstone at Milton Court, Silk Street, Barbican on: Thursday 23rd March 2017 7.30pm" The awards evening is produced by GSMD in partnership with the Worshipful Company of Musicians. The Dankworth Awards awards will be presented by members of the Dankworth Family.

Congratulations to Matt and all the other winners!
Posted by Editor at 04:20