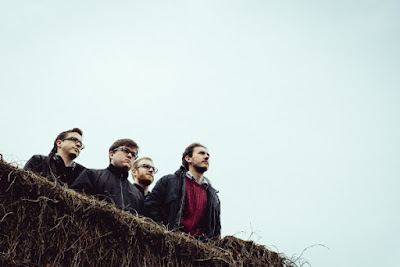 Jazz listeners first came across guitarist Alex Munk when he came to Leeds to study Jazz at Leeds College of Music from 2006-2009. He then moved to London to study his Masters at the Royal Academy in London and since then, he has proved himself to be a guitarist at the forefront of the jazz scene. He has maintained his connections with the North, bringing his own group Flying Machines to perform in Leeds as well as working with fellow LCoM Alumnus Matt Anderson in his group Wildflower and in 2015, he was invited to take part in an all-star big band put together by Nikki Iles to celebrate 50 years of Leeds College of Music.

Alex has recently recorded his debut album with his quartet, Flying Machines and has now launched a Kickstarter campaign to raise funds to help with mastering, CD and print costs and PR. Their target is £3,500 and the total currently stands at 38% with 20 days to go.

We have the end in sight! It's been a long haul (no pun intended) but the final mixes of our debut album, which we recorded last year, sound like they did in my wildest dreams. All the rehearsing and gigging really paid off. We've captured 9 original compositions in the studio and there's something on the album for everyone, from visceral, rock out improv to lyrical ballads and lush soundscapes. We worked with an incredible engineer called Tim Thomas for both the recording and mixing; he has done a wonderful job of bringing this music to life.

We are aiming for a late September 2016 album launch date, ahead of our national tour in February 2017. We already have a number of dates booked, from Cornwall, London to Edinburgh - we hope to see you at one of them! We'll be adding more dates as we go along.

Donors can opt to pledge at a number of different levels, each with their own rewards. These range from digital downloads of the album to guitar lessons and private gigs by the band.

You can find out more about Alex and Flying Machines by visiting his website, and to learn more about the Kickstarter and donate, see their campaign page.
Posted by Editor at 02:25