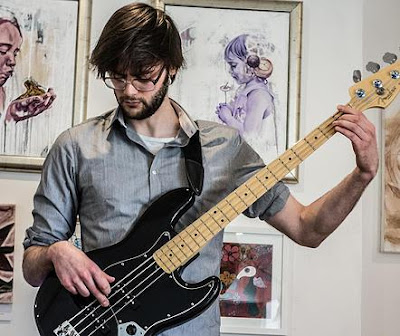 Wandering Monster is the outlet for the compositions of Leeds based double bassist Sam Quintana. Since it’s inception in the autumn of 2014 the quintet has honed and refined a sound which takes influence from the metric, off­kilter grooves of artists such as Dave Holland and Kurt Rosenwinkel, as well as the intensity of older blue note, hard­bop recordings. The band features, Andy French on tenor saxophone, Calvin Travers on guitar, Aleks Podraza on piano/keyboards and Tom Higham on drums. Also associated with projects such as Zeitgeist and Stretch Trio, these musicians are amongst the most active on the Leeds music scene.

Their debut two track EP was recorded 26 October 2015 at Leeds Fold alongside a video by Maria Alzamora. Recorded mixed and mastered by James Hamilton for New Jazz Records.

The EP will be released next week but a video, shot by Maria Alzamora, is available to watch on the New Jazz Records website.