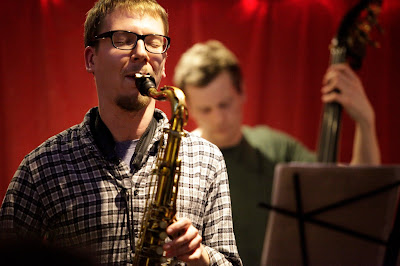 Saxophonist Matt Anderson is bringing his Wildflower sextet back up North for three gigs in January, after his recent move to London to study at the Royal Academy of Music.

The band released their debut album on Jellymould Jazz to a very positive reception. Jazzwise said Their own unique stamp on Shorter's very personal repertoire... of a quality that resonates with its inspirational source... Enjoyably un-pretentious.

The sextet draws on an all-star line-up of UK jazz musicians. Laura Jurd was recently named 'Jazz Instrumentalist of the Year' at the Parliamentary Jazz Awards and a BBC New Generation Artist, and has recently released her second album 'Human Spirit'. Guitarist Alex Munk is a recent graduate of the Royal Academy of Music and is currently working with a number of distinguished UK musicians/groups including Stan Sulzmann Big Band, Ivo Neame and Trish Clowes as well as his own band Flying Machines. Pianist Jamil Sheriff is the Jazz Pathway Leader at Leeds College of Music and is well known for his own projects such as his Octet, Big Band and Trio. Finally, drummer Sam Gardner and bassist Sam Vicary have built up a rapport playing together in a variety of settings, from appearing with jazz artists such as Jiannis Pavlidis, Tim Whitehead and Krzysztof Urbanski to performing and recording with ambient hip-hop band Ikestra, and the latter has recently recorded and toured across Europe with the Cinematic Orchestra.

gig, trumpeter Mark Chandler will be substituting for Laura Jurd)
Posted by Editor at 03:16