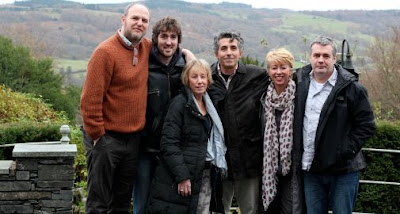 The Printmakers have become one of the UK's most beloved groups. The band's line-up features some of the country's most creative musicians - Mike Walker, Mark Lockheart, Norma Winstone, Steve Watts and James Maddren. In May 2015, they received their debut album, Westerly, to critical acclaim and on January 27th they are to perform at The Sir Jack Lyons Concert Hall in York.

‘Wonderful playing from some of Britain’s best jazz artists, not to mention a deeply creative, almost orchestral approach to the collective sound that totally serves the music, or more accurately, serves the song.’ Jazzwise Magazine

Tickets for the event cost £16/14/5 and audiences are advised to book soon as it's sure to be a full house. For full information visit the York University website and the website of bandleader Nikki Iles.
Posted by Editor at 04:03