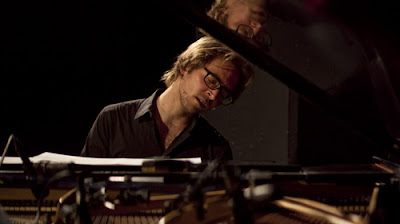 October might seem like a long way off but audiences are advised to get in early and book tickets for what is sure to be a sell-out performance by NYC pianist Aaron Parks in trio with Ben Street and Billy Hart.

Appearing at the Howard Assembly Room on October 2nd, this date is part of Parks' first UK tour. Lauded as a musician at the forefront of the improvising scene in NYC, he has already built up an impressive discography including four albums for Terence Blanchard and his own records Invisible Cinema and his ECM solo release Arborescence.

Drummer Billy Hart has a career that spans decades and includes time with musicians like Miles Davis and Wes Montgomery. Continually looking forward, Hart has produced a number of acclaimed albums in recent years including All Our Reasons and One Is The Other, both on ECM.

Finishing off the line-up, Ben Street appears on Billy's two ECM releases and has also recorded with people like Kurt Rosenwinkel and Mark Turner. A student of Buster Williams and Miroslav Vitous, he is a sought after musical collaborator for many.

Tickets cost £12.50 and can be ordered from the Howard Assembly Room website.
Posted by Editor at 03:52