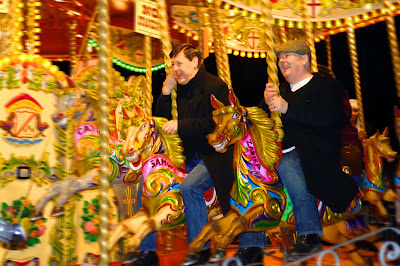 The Northern Aldborough Festival has been promoting live music in Boroughbridge in North Yorkshire annually since 1994. This year, the festival takes place from the 11th until the 20th of June, featuring performances in a wide range of styles. In their programme this year there are two jazz events featuring trumpeter Guy Barker with Ian Shaw and vocalist Martha D Lewis.

Award-winning trumpeter, composer and broadcaster Guy Barker joins forces with award-winning jazz vocalist, pianist and broadcaster Ian Shaw in an evening celebrating the fabulous force that is The Cinema. Behind the scenes, the bad, the bitchy, the beautiful, black and white romance, gangland murder and mayhem; Chaplin, Bogart, Baloo and Bond. With no apology, this jazz odd couple present a musical Babylon for all tastes . . . but no popcorn or children! With Guy’s mother an actress, his father a stuntman, and Ian’s childhood an obsessive period of black and white films and musty old Picturegoers handed down from an aunt, this two hour two-hander is a must.

Lewis leads high powered, spirited top class world and jazz musicians in a 3 part show packed with an evocative nostalgic music journey which begins from shanty towns urban Athens 1910’s 'rembetika' repertoire; leading to Vintage Europeanized Greek music years of 40’s-60’s reminiscent of the Piaf and Dietrich era; and forwards to Lewis’ CD release, the award nominated ‘Homage To Roza ’an album of contemporary remakes of classic rebetika songs by the early Queen of Rembetika, Roza Eskenazy. Critically acclaimed as ‘Nu Rembetika’ this album is "a stimulating contribution to the margins and borders of World music leading to its own groundbreaking genre".

For full information on the festival, visit the Aldborough Festival website.