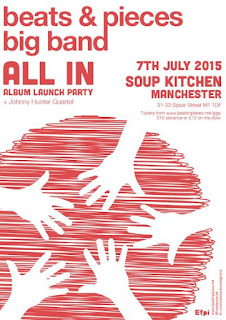 Since it's release on June 8th, Beats & Pieces' new album All In has received four star reviews from the Guardian, The Times, Jazzwise and The Evening Standard.

The band have two album launch dates coming up; one at the Soup Kitchen in Manchester on July 7th and another at Ronnie Scott's in London on July 8th. Unfortunately (or fortunately, if you are in the band!) the Ronnie Scott's date has already sold out so you're advised to get in quick to ensure you get into their Manchester gig.

More information on those dates, getting tickets and where to buy the album can be found on the Beats & Pieces website.