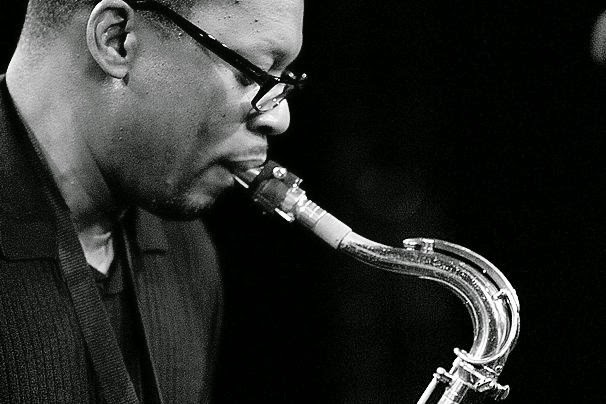 It's been a strong week for international jazz in Leeds; Ravi Coltrane Quartet on Wednesday, Arve Henriksen on Thursday and Phil Donkin's quartet featuring Glen Zaleski and Colin Stranahan on Friday. People were out in force for Ravi on Wednesday, where he played to a full house at the Howard Assembly Room in Leeds.

From the first note to the last, this gig was exceptional. Opening with Ornette Coleman's Bird Food, drummer Jonathan Blake and bassist Dezron Douglas switched from broken, free playing to the type of swing that we all long to hear but seldom do. Pianist David Virelles opened the second piece ('Marilyn & Tammy' from Ravi's latest album Spirit Fiction) with a solo intro, his searching and thoughtful improvisation ringing throughout the hall. Pianists tend to get a rough deal in that room, which isn't particularly well suited to jazz gigs (especially those with drums or an amplified double bass) but it didn't seem to hamper Virelles one bit. His solos employ chords, clusters and textural playing as often as single lines so there was no danger of being drowned out by the acoustics.

Switching from tenor to soprano (and on one occasion, playing Strayhorn's Lush Life, sopranino), Ravi Coltrane continually confirmed why he is regarded so highly as an improviser. Every solo was had its own identity, strong and creative. His rich, warm tenor sound filled the hall as he played his ballad, 'The Change, My Girl' and his interaction with drummer Jonathan Blake on 'Quilly's Blade' was frenetic and exciting.

The two sets were very well put together, showcasing the many sides and sounds of the band. Ravi included a composition of Blake's, Homeward Bound to close the first set and gave Blake the opportunity to let loose. They make a very strong team, Douglas and Blake, as in fact do the band as a whole. Ending on Lush Life, it seemed clear that the band had an encore up their sleeves and they did not disappoint with a hugely energetic Countdown, with metric twists and turns throughout.

The fact that he is John Coltrane's son is incidental. Ravi Coltrane is a virtuoso and an important voice in jazz all of his own accord; as indeed are his three band-mates.
Posted by Editor at 06:13