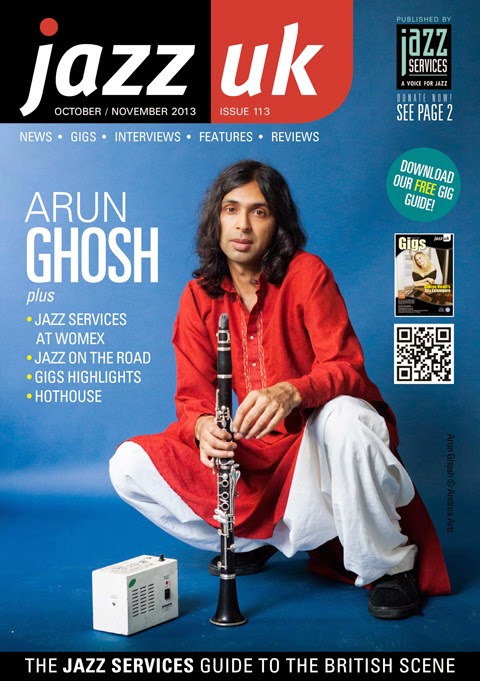 Jazz Services have issued a press release detailing their plans to restructure and cease production of their magazine, JazzUK.

2015 marks their 30th year and following the withdrawal of NPO status in the last Arts Council funding round, the organisation are to undertake a radical new business model to ensure the longevity of their work in the UK jazz scene. Though details are yet to be confirmed, Jazz Services will now focus more closely on artist and audience development and working in partnership with other organisations to contribute to the jazz scene at a national level.

One change which has been announced is the closure of JazzUK. Jazz Services have been working closely with Jazzwise to produce listings and have said that they intend to further this partnership in the future.

Jazz Services announces it is about to embark on a comprehensive restructuring process that will take the organisation into 2015 and beyond.  One aspect of this process is that its long-running magazine JazzUK has had to cease publication in its current form.Following the withdrawal of its NPO status in the last round of Arts Council England funding, Jazz Services has been working hard both internally and externally.  This has involved consulting with the wider public, continuing its encouraging discussions with the Arts Council England and other related parties and most recently undertaking a comprehensive organisational review. These results of these activities have informed several key decisions about the organisation’s present and future endeavours, and to coincide with its 30th anniversary in 2015, Jazz Services is now developing a new and revitalised business model that will ensure it can continue working with and for the UK’s jazz scene beyond the end of March next year.While yet to be finalised, the new Jazz Services model will place a greater emphasis on artist and audience development, working in partnerships with related organisations and groups to offer a more rounded support network to artists throughout their careers as well as contributing towards a healthy live scene for both artists and audiences.In the coming months Jazz Services will be concentrating its energies on ensuring that the organisational redevelopment process goes ahead in the most efficient way possible.  Jazz Services’s core delivery programmes – such as its funding schemes and preparation for April’s JazzAhead event - will continue as normal until the end of the current funding period, but as part of the immediate streamlining process the current incarnation of JazzUK has ceased publication effective immediately.However, for the past few years JazzUK has enjoyed an extremely productive partnership with Jazzwise magazine to produce monthly live jazz listings, available on the Jazz Services website as the digital guide Gigs (which can be read and downloaded for free along with previous archived issues of JazzUK) as well as in the print edition of Jazzwise and on Jazzwise Magazine’s website and app.  As part of the more collaborative model proposed for Jazz Services in the future, discussions are currently in place to expand and develop this partnership further, with more details to be announced as they are available. JazzUK’s editor John Norbury-Lyons said, “It’s a shame to have to close the magazine in its current form after so many issues, as it’s been a great way to communicate the amazing work done by so many of those involved in the UK’s jazz scene, as well as Jazz Services’ own activities.  But Jazz Services has to change, and now the organisation has to focus on making those changes to ensure it’s still in a position to support the jazz scene going forwards.  Prioritising time and resources is a necessary part of that process, and unfortunately this means JazzUK has had to close.“I hope that in its own way the magazine has helped contribute to the success of the artists, promoters, broadcasters, writers and others featured in its pages, and I’d like to take this opportunity to give my sincere thanks to everyone who’s been involved in its production over the years.  In the meantime, the discussions with Jazzwise magazine are very encouraging and hopefully there will yet be a future for the JazzUK name as Jazz Services continues to evolve.”
Posted by Editor at 04:25