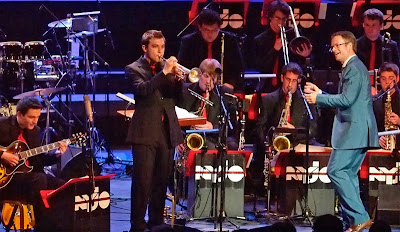 NYJO have had a busy year fulfilling numerous concert dates across the country, recording a new album and appearing on radio and TV. In 2012, the band appeared on BBC television performing at the Royal Albert Hall as part of the BBC Proms. More recently, the considerable talents of the band were enlisted to accompany pianist Jamie Cullum in an early morning concert at St Pancras station in London.

Though based in London, the North is well represented in the band with the saxophone section featuring 3 LCoM alumni - Riley Stone-Lonergan, Phil Meadows and Nadim Teimoori.

To book tickets to see the band in action, contact Jo Appleby at j.applebyATst-peters.york.sch.uk (replacing AT with @)