Jazz to play at parties... 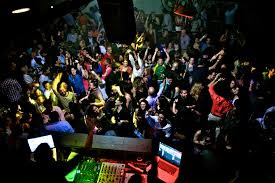 As a fan of and student of jazz music, I often find myself in situations where I am reluctant to disclose these pieces of information about myself. There have been countless occasions where upon meeting new people I have found myself answering the question ‘And what do you study?’ with the word ‘music’ rather than using the dreaded J-word, or occasionally, when I’m feeling particularly inventive, I steer clear of it altogether and opt for safer territory such as ‘history of art’ or ‘golf course management’.
However, the times when my ploys do not work and my cover is blown I can usually rely on my other musical tastes to continue side-stepping jazz, therefore not alienating myself from society. Like most jazz fans my musical horizons are quite broad, and I can usually lean on these other musical options when required to pick a record to be played in a social situation. However, perhaps there is a time when we need to take a stand and begin to push a few jazz records into the public eye. So, in order to begin this mission, I present a selection of the jazz(ish) records which I have begun to sneak into parties and gatherings around Leeds. Obviously, there are many Blue Note classics and various other jazz records that are more than palatable for someone new to the music, but they have all been written about before, so I have decided to write about a few albums that don’t get much air-time.
Jazz(ish) Albums I Have Gotten Away With Putting On At House Parties

T.J.Kirk is a criminally unknown band from San Francisco who were active in the 1990s and focus their attentions on the music of Thelonious Monk, James Brown and Roland Kirk (hence the name). They take the compositions of these three artists and create sometimes almost unrecognisable amalgamations of them, most of which turn out as a sort of twisted Hammond-based funk. The music is very danceable but also quite knotty and complex with some great soloing, but most importantly this band can really groove. They can really, really, groove. As far as I know ‘If Four Was One’ is their only studio album, and though very much in the same mould from start to finish, it is a very strong offering.
For me the highlight is a medley of Brown’s ‘The Payback’ and my favourite Monk tune, ‘I Mean You’. The piece opens with a gently simmering reading of the James Brown tune, quite reminiscent of something from a 1970’s cop show but somehow in a good way, before the groove begins and the guitars state the head of ‘I Mean You’ like you’ve never heard it before. Where the original has Monk’s trademark rhythmic idiosyncrasies, here the melody is jagged and sparse but still sits right in the pocket. After the tune, the guitars open up for some righteous shredding, obviously, before closing with a cheeky, clichéd swing ending.
Other top tracks are a brilliant rendition of Monk’s ‘Four In One’, which includes some very Scofield-esque guitar playing and swings like anything, and a brilliantly jaunty version of James Brown’s ‘Get On the Good Foot’ which segues into a very tongue in cheek ‘Rock Hard In a Funky Place’ by Prince.
Perhaps not party material, but there is also a gorgeous performance of Monk’s ballad ‘Ruby My Dear’ on the album as well, which slips briefly into an oddly satisfying 6/8 rock shuffle.

Snarky Puppy, seemingly one of the hardest working bands in the world, are finally beginning to get the level of international acclaim that they really deserve, and if their new album ‘GroundUP’ says anything it’s that they deserve more. The band is really a near thirty-strong collective of top U.S. session musicians and improvisers from who met at the University of North Texas, but this group is distilled into a leaner ensemble (still comprising of two pianists, bass, drums, one or two guitars, percussion and horns) for albums and touring. Showing an incredible range of sounds and influences, this wonderfully eclectic band are party friendly in that, despite being very diverse, their music is melodic, catchy and rooted in funk, afrobeat and hip-hop. However there is so much there for the jazz musician too: the rhythm section makes odd time signatures irresistibly danceable, the horn writing is brilliantly creative and the soloists are ferociously talented. The first track ‘Thing of Gold’ is quite an understated opening to an otherwise very engaging album, but builds over nearly seven minutes to a peak featuring some uplifting horns and Hancock influenced synth soloing. My personal favourites are the bouncy 6/4 afro of ‘Binky, with particularly excellent performances from both the trumpet soloist and percussionist, and the closing track ‘Quartermaster’. This tune begins as good but unremarkable funk, but sticking with the tune will reward you with a journey through a New Orleans funeral marching band to an ending worthy of the Blues Brothers. This is clearly a band of precocious talent who are making genre-bending music that is both stimulating and accessible. Expect to hear lots more from them in the future.

This is a collection of Jordan’s classic later recordings, with the band and Jordan himself on top form. This group contributed heavily to the creation and following popularity of jump-blues and jive and from these recordings it’s clear why.
The Tympani Five are tight but also raucously bluesy, ad libbing around Jordan’s vocals with shouts and interjections without ever dropping a beat. Jordan himself is incredibly charismatic, his stories and cautionary tales of alcohol, women, food good and bad and other typical blues subject matter are as hilarious as ever (‘I’m going to drink to everyone’s health until I ruin my own!’) and delivered with his usual rhythmic flair and huge vocal leaps.
His often overlooked saxophone playing is also fantastic; a little dated perhaps and full of what are now blues clichés, but it suits the music perfectly. Let’s not forget that Sonny Rollins credits Jordan as one of his earliest influences, sitting right alongside Coleman Hawkins.
This is one of my favourite jazz albums to play to the public ear (when I’m feeling kind that is – when I’m not its Albert Ayler). It’s great to dance to, brilliantly comedic and features some truly great musicians.

Now, all the albums here so far have been for the dancing and socialising portion of the party but now I would like to turn my attention to the later stages of the night. What I have in mind is that last hour of the party when most people have left or gone to bed and those few that remain are sprawled over sofas with innumerable drinks spilled over their shirts. These people will feeling both overly sentimental about that girl that left without them and that beer they misplaced earlier in the night, but also determined to stay awake for another hour or so to wallow, discuss the deeper meanings of things and finish that bottle of whisky. This calls for a different sort of jazz record.

#4 – Tom Waits : Nighthawks at the Diner

My classic late night whisky album, and in my eyes Tom Wait’s most jazz oriented album, this is also the first Wait’s album I ever heard. My Dad played me his double LP and I hated it, but a year or so later something called me back to it and I was hooked. Not unlike Louis Jordan, Waits’ subject matter for the album is drink, food and cars but mostly women and all the sorrows that come with them. His long, off-key stories read like the work of some great unpublished beat poet, as he growls the lyrics like the bastard child of Bukowski and Louis Armstrong.
Rhythm section open the album with a deeply swinging blues vamp, with Jim Hughart on bass and Pete Christlieb on tenor both sounding fantastic. Wait’s trademark voice enters like an old steam engine filled with gravel saying ‘Well, an inebriated good evening to you all….’ to his live studio audience and telling a few dirty jokes before launching into the first track ‘Emotional Weather Report’. Waits’ chat between tunes is included on the album and feels just as vital as the songs themselves, as he has the audience in the palm of his hand from the very start.
A standout track for me is ‘Nighthawk Postcards (From Easy Street)’ which opens with some walking bass from Hughart that is very reminiscent of Doug Watkins’ intro to Rollins’ ‘Blue Seven’ before Waits hisses into the microphone ‘Hmmmm…Goodness gracious! My bass player should be chained up somewhere...[like a] mongrel, canine……Well, I want to take you on a kind of inebriated travelogue here…’. He then continues into a drawn-out story of the late night events of inner-city America in times long gone, in all their seedy humour (stroking a goateed chin, using parking meters as walking sticks…with my eye lids propped open at half-mast) but somehow makes it all seem poetically beautiful. A lovely moment half-way through where the rhythm section effortlessly slips into double-time is a great foil to Wait’s bluesy delivery. Classic Waits, highly recommended.

‘Night’ is a relatively unknown album from Abercrombie, released in 1984 on ECM. As the title indicates, this album is moody and full of space and atmosphere. Joined by Jan Hammer on organ, Michael Brecker on saxophone and Jack DeJohnette on drums, Abercrombie and the ensemble play a set of delicate originals, the heart-breaking ballad after which the album is named being a fine example . All those that claim Brecker’s playing to be purely technical and lacking in emotion should hear this album, where his keening, searching playing suits the soulful, melancholic music perfectly.
The opening track, Ethereggae (the only tune not by Abercrombie, having been brought to the session by Hammer) is perhaps a little dated with its opening synth sounds and reggae vamp, but the remainder of the album has survived the past twenty-nine years and remains as fresh as ever. The ensemble know just when to move on from the poignant, introspective sound that they create so well and to take the energy up a notch, such as on the final track ‘Four On One’ which features a frenetic head and strong soloing from Hammer and DeJohnette. This well executed balance of restraint and fire makes the album particularly satisfying and equally effective for setting a background atmosphere and being an engaging listen.