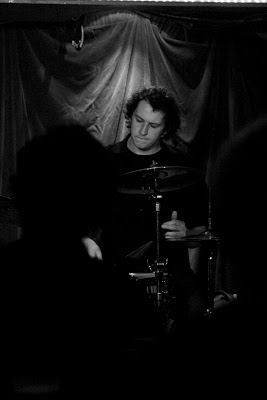 Born in the Midlands, drummer and composer Dave Smyth moved to Yorkshire to study music at York University. As well as working as a jazz musician around Yorkshire, he studied with Martin France Julian Arguelles and Martin France and after graduating, moved to London to study his postgraduate degree at the Royal Academy of Music.
He is about to embark on a UK tour in June with his octet, Timecraft (which featured saxophonist Iain Ballamy on their debut gig).


Tell me about the group - how did it come about and why did you choose those musicians to be involved?

I can’t quite remember how exactly I ended up running an octet...a few years ago I wrote a suite for big band and then I started to write a few things for quartet, so I think it came about as a bit of a half-way house between those two things really. Our first gig was around 18 months ago at the University of York and we were lucky enough to have Iain Ballamy as a special guest, which was an amazing privilege, and since then we’ve been doing bits here and there leading up to the tour.

I met almost everyone who plays in the group when I started my MA at the Royal Academy of Music. The personality of the individual musicians is always the most important thing to me when I’m putting a band together, so it was really about choosing people who were fun to play with as well as having the right reference points musically.

How have you found it logistically, organising a tour for a larger ensemble?

It’s not been easy! I think it’s difficult for all musicians trying to organise tours at the moment, and the main difficulty really is trying to make the tour break even financially. The outlay really escalates with an octet, which I guess is why you don’t see many larger groups on tour. The promoters who are putting us on have been extremely supportive and enthusiastic, but there have been a couple of gigs that have been pulled fairly last minute due to financial pressures which might make it difficult for us to make the books balance...that said, we’re really looking forward to doing all of these gigs and I’m sure that it will make the hard work pay off!

You have this octet, and I know you've also written for big band. Are larger ensembles your preferred medium for composition?

I’m not sure really as I’ve never really thought about that, so it’s probably down to circumstance rather than a decision to write for larger groups. I think maybe when I was starting out with writing music I had a bigger interest in larger groups than I do now, so that might have been a factor initially. There is definitely something about the fullness of sound from a larger group that I like, particularly from having guitar and piano working together, but then I also like the combinations of smaller groups within the bigger group, too. I think if I do have a natural affinity of writing for medium-sized groups, what probably attracts me to them is the possibilities of sounds and textures from the duos/trios/quartets within that group and also the range of musical personalities that are available to you.

You studied in York and then moved to London. How have you found the move, musically and otherwise?

It’s been great! I moved down to London in September 2011 to start my masters at the Academy and, apart from the huge expense of living down here, it’s all been pretty positive. I really enjoyed living in York and there are lots of amazing musicians there, particularly given the size of the city, but I felt that to really progress with the music I wanted to play I needed to move. Living in London has been a fantastic experience so far - it’s amazing to mix with so many likeminded musicians and to have so many great gigs on your doorstep. I’ve found the musical community down here to be extremely warm and welcoming which I hadn’t anticipated really, and the course has provided some amazing opportunities, too. Obviously the cost of living is a factor, and you really don’t get very much space for your money, but for me at least the benefits far outweigh that factor, and I would definitely recommend it to any musicians who are unsure about making the move.


Looking beyond this tour, what else do you have planned for this year?

Well, we’ll hopefully be recording our debut album with Timecraft later in the summer, and then after that we’ve got a couple of gigs pencilled in taking us through to next year. Aside from that, I’ve been working with York pianist and composer Jon Brigg in a new quintet featuring Chris Montague (Troyka), James Mainwaring (Roller Trio) and Mick Bardon (Shatner’s Bassoon). Jon’s trained in both classical and jazz music and is what I would consider to be a proper composer - someone who deals with sound and has real concepts as opposed to simply writing tunes - so this is a particularly exciting new project for me, and playing with the other guys is a real privilege, too. We’re hoping to record and release an album of that music late this year, too, so I’m looking forward to that!

Tell me about an album or a musician you've been listening to recently.

I’ve been checking out an older album by the pianist Huw Warren called Hundreds Of Things A Boy Can Make. I’ve always liked Huw’s playing and writing, particularly with The Perfect Houseplants and his Hermeto+ project, and I was recently introduced to this album by my journalist housemate. It’s a surprisingly big group that at its core features Mark Feldman (violin), Mark Lockheart (sax), Peter Herbert (bass) and Martin France (drums) amongst others. There’s something about the way that Huw writes major melodies that manages to strike the perfect balance of being uplifting, having a certain degree of humour but without being twee - much in the same way as Django Bates I guess. Anyway, it’s a great album and worth buying just to hear the tune Sheep.