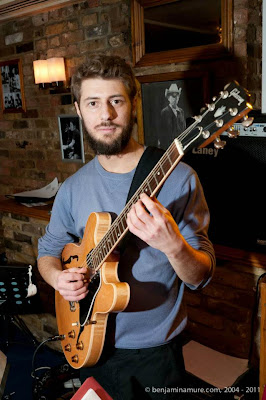 Guitarist and composer Alex Roth is a graduate of the Royal Academy of Music, and is part of a group of forward thinking UK musicians who take inspiration from visual art, dance, film and literature as well as music.He performs with groups including Blue Eyed Hawk, CHAOS orchestra and Outrenoir, but has recently been recognised through his work with his own group, Otriad and their decision to embrace crowd-funding as a way to finance their UK Tour. He joins a small but growing number of jazz musicians including Gwyneth Herbert and Reuben Fowler who have explored this source of funding. In return for pledging money which will help to fund their UK tour, Alex and the group have a number of rewards and unique experiences to offer. We spoke to Alex about the project, crowd-funding and what lies ahead for him in 2013...


What made you decide to try crowd-funding?

Primarily necessity. I booked most of the tour dates for Otriad last year but as it's a relatively new band the options for funding were quite limited. There's a kind of vicious circle around touring support in the UK: in order to secure funding from, say, Jazz Services the fees paid by promoters need to be in line with Musicians Union rates, which for Otriad would be around £540 per gig. But not many of the venues with that kind of money coming in will book new bands that don't have a sizable PR campaign behind them, especially when they're playing music that doesn't easily fit into the usual pigeon-holes. So we rely on musician-run gigs at smaller venues around the country, which typically make very little (if any) profit. Of course, this means that the need for funding is even greater than for a band attracting the recommended rates in the first place, and so it can be difficult to develop new projects to the point at which they can demand those kind of fees.

What a band needs most when starting out is lots of gigs, but driving five musicians a thousand miles around the country, not to mention feeding and accommodating them, is expensive! I was determined to make this tour happen though, because the kind of music we play - which has been developed collaboratively over many months and without any notation  -  only really comes into its own in front of a live audience.

I did a lot of research into crowd-funding and saw it was working for other similar projects. The directness of it really appealed to me, by which I mean that the people who are actively interested in a particular project can actually make it happen. In doing so they build up a meaningful relationship with the project creator and receive perks in the shape of rewards. Often these rewards can include access to the very thing the backer has helped to facilitate (tickets to a tour date in my case). This is quite different from the pre-existing model of the grant-giving organisation, whereby a panel of judges is entrusted with the task of determining which projects get funded (and by extension, the range of work on offer to the general public). By opening up the funding process to individual contributors, the power to make things happen is shared among "the crowd"
What has your experience been so far in using it - how have people reacted?

I was quite cautious about the whole thing to begin with. By its very nature crowd-funding is an overtly public operation, and I think to do it successfully one needs to be comfortable placing the fate of a project in the hands of others. This was a difficult thing for me to do because touring under my own name for the first time in six years represents an important (and very personal) step for me.

Initially I struggled to align my emotional investment in the project with the fact that a crowd-funding campaign is essentially (to put it bluntly) a sales pitch directed at potential investors. Many of the countless blogs and e-books I read on the subject seemed to prioritise the "virality" of a project - usually achieved by being funny, quirky or otherwise "share-able". But the more I thought about it, the clearer it became that I just needed to present my project in the most honest and transparent way I could, and hopefully when people watch my video and read the story behind the music I composed for the band that's the impression they get.

Not unlike other types of campaigns - political ones for instance - crowd-funding takes a pretty colossal commitment, from budgeting and thinking up creative rewards through to scripting and filming a video pitch and personally emailing each and every backer. And it's not over yet! But every time someone pledges support I'm reminded that there are people out there who want to help me realise my goal with this project, and that's profoundly encouraging.

So the most meaningful reactions to my own campaign have been those of the pledgers, who to my mind have validated not only my work but also the medium of crowd-funding itself.
Do you think this new way of funding has a place long-term in funding arts projects?

Crowd-funding is already a big industry. Last year $2.7 billion was raised for over a million projects worldwide. A recent report predicts that that figure will double this year. It's not hard to see why. The arts sectors - and particularly the music industry - have been adopting a D.I.Y aesthetic for decades now. Plenty of bands are now producing their own records, setting up their own labels to distribute them and promoting their own gigs at which to sell them. I think it makes sense that artists are now looking at ways to fund those activities without relying on chronically endangered and highly competitive state support.

Similarly large companies seem to be realising that if they consistently provide their customers with a quality product and/or service, those customers will willingly support their next venture. I consider this a positive step for industries worldwide.

But let's not forget that private benefactors have supported the arts for many centuries already. At least as far back as Bach's time patrons would directly support the activity of their favourite artists and receive exclusive benefits in return. It seems unlikely that the Goldberg Variations, the Trout Quintet or the Razumovsky Quartets would have come into existence without this kind of patronage.

However, I think we're already witnessing the end of crowd-funding's honeymoon period. Soon it will likely be considered the primary fundraising tool for many types of business, from individuals and small start-ups to multi-ational corporations. The question then will be: how do we compete with everyone else for the same share of potential backers' disposable income?
Tell me about the band, Otriad and what people can expect from a live performance?

I formed Otriad while I was studying for my Masters degree at the Royal Academy of Music. A big part of the inspiration behind the band was the incredible story of the Bielski brothers, Polish jews who during the Second World War went into hiding in the Naliboki forest in what's now Belarus to escape being captured by the Nazis. Over the four years they were in hiding they started sheltering other Jewish refugees, and by the end of war the Bielski Otriad, as they'd become known, included over 1200 men, women and children. Together they survived the most extreme conditions, fighting off German troops on one side, Russians on the other, and local civilians who were encouraged to turn them in for rewards.

I come from a Jewish family myself with roots in Poland and Belarus – and I also have two brothers of my own – so this story really resonated with me, and I decided to compose a suite of music based on it. I knew when I was writing the music that I wanted to play it with my brothers: saxophonist Nick and percussionist Simon. The three of us grew up playing music together and the relationships I've developed with the other two have had a huge impact on what I do, so this seemed like the perfect opportunity to harness that. The other two musicians in the band are saxophonist Joe Wright – who also does live electronics – and bassist James Opstad, both amazing musicians I was lucky to meet at the Academy who have since become two of my closest collaborators.
The Bielski Suite (as I ended up calling it) runs continuously through five parts, each one dedicated to someone who has had a profound impact on me and the whole piece is dedicated to my mother Joy, who got me started on this path and who has been a constant source of inspiration since.
We played the Suite for my final MA recital at the Academy last year and since then we've been playing around London to really enthusiastic responses. I can't wait to take it on the road!
Aside from the Otriad tour, what have you got lined up for the rest of 2013?

Immediately before the tour Nick and I are playing at a festival in Switzerland with his band Yurodny, a nine-piece Balkan-inspired party band! I'm just guesting with them on that one but Yurodny are then headlining the Songlines Encounters Festival at Kings Place on 5th June alongside Paprika (which Simon and James also play in) and She'koyokh.

Just after the tour I'm delighted to be playing for the launch of the debut album from the wonderful singer/violinist/songwriter Alice Zawadzki, which we recorded back in March, with gigs at Kings Place (15th June) and Jazz Cafe POSK (22nd June), a lovely venue in the Polish Cultural Institute.

In July I'm involved in two other really exciting recording projects. First Blue-Eyed Hawk, a quartet with Lauren Kinsella, Laura Jurd and Corrie Dick, will be finishing off its debut album, which features original music by each of us. We plan to release it in a rather unusual format but I can't reveal the details of that just yet! We're also playing a couple of gigs around London over the coming months, including Lauren's final MA recital at The Vortex on 11th June.

Then I'll be back in the studio the following week with Laura's contemporary big band Chaos Orchestra to record amazing music by her and several other band members, plus I think a commission from Mark Lockheart. I'm really excited that a piece of mine will be on the album too.

Over the summer I'll be working on a multimedia show I'm producing for ten-piece electro-acoustic chamber ensemble Sefiroth, which I co-direct with my brother Nick. Last year we released an EP of re-imagined Sephardic folk songs and I'm now weaving songs from the EP into an immersive live performance featuring choreography for five contemporary dancers by Katarzyna Witek and video projection by digital media studio SDNA. The project has been generously supported by Musicians Benevolent Fund, PRS for Music Foundation and Arts Council England and there'll be a three-night run of performances in October.

Amongst all that there are gigs with the Tom Millar Quartet (Jazz Nursery, 6th June) and the Simon Picard Quartet (The Harrison, 26th June), plus a trip to Italy to play with Sudanese/Italian singer Amira Kheir.