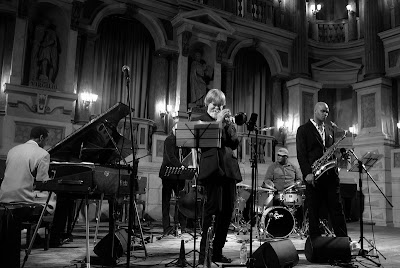 
Tom Harrell's two nights at Ronnie Scotts this week has been long anticipated. As pianist Tom Cawley said in his introduction on Monday night (Tom's trio were the support band for Harrell), it's been over a decade since Tom last played in the UK. Those who follow Harrell on facebook or twitter will recall him posting this on March 2nd, 2013:

Tom Harrell: I'm thinking about adding a date in London in late May. I sort of have to be back in NY but I guess I could extend my stay in Europe for another day.
A few weeks later, the Ronnies dates were confirmed and it was so.
The quintet were on top form and it was easy to hear that the group have been playing together for a number of years. Quintet seems to be Harrell's preferred line-up, and the pairing of him and tenor player Wayne Escoffery works well. They opened the gig with Time of The Sun, which set the tone for an evening of predominantly original music by Harrell. A quiet audience and a great sound engineer meant no-one had to over-play, allowing the group to build intensity from within, and have the freedom to move in any direction they chose.

A number of the tunes played featured vamps, showcasing the formidable technique of London-born Escoffery. Pianist Danny Grissett shared the solo space with the front line throughout, building exciting solos and rising to the challenge at every turn.

In a gig as strong as this one, it's hard to choose highlights, but a duo rendition of Darn That Dream with Harrell and bassist Ugonna Okegwo was outstanding. Tom Harrell playing over standards is an education for all improvising musicians and it's clear to see why he's considered one of the best jazz trumpet players in the world.

Drummer Jonathan Blake shone and his infectious smile was reflected back by an enraptured audience. There isn't a weak link in this quintet and each of their musical personalities are distinguishable whilst always maintaining a strong band sound.
The sold-out audience seemed unanimous in their enjoyment. Prior to the gig, a man sat in front of me truend around to ask who was playing. "I've been brought here as a surprise - I'm a completely novice but I love jazz". I wonder what he thought of the gig...Something tells me that Harrell has set the bar pretty high for this chap's future jazz experience.
Posted by Editor at 07:10