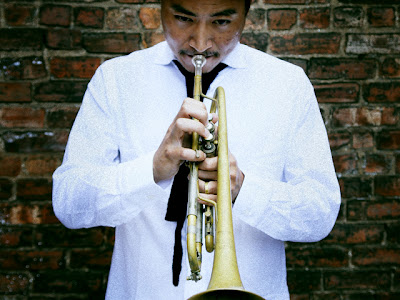 Takuya Kuroda is a Japanese trumpet playing living in NYC. Originally from Kobe, he moved to the States in 2003 to study at the New School and has stayed ever since, becoming a fixture on the New York jazz scene. He has released two albums as a leader "Bitter and High" (2010) and "Edge" (2011). He is currently touring with singer Jose James.


You're currently on tour with Jose James. Tell me about about that band - how long have you played with Jose and what is your role in the group?

Jose's band is really exciting. Not only great songs throughout  but also a lots of improvisation happening from all the members. You never know where the music going to next so I always enjoy been on the stage with the Jose's band (including Kris Bowers, Solomon Dorsey and Richard Spaven.) I have played with Jose for 2 years now. Jose told me once that he likes to consider this band as a quintet. So sometimes I feel like he and I are 2 front men. I try to play the trumpet like singing and sometimes I would like to add some spice to the show by taking solo. For this album, I did all the horns. I spent a long time arranging these horns. Jose and I talked about arrangements and I came up with ideas and polish them. It was fun. Adding horns to songs is not easy because it can change the vibe but if you do it right, it makes the song's concept and vibe more dynamic and clear.
Aside from Jose, what other projects are you currently involved in?

Here's the some of the projects I'm involved: Takuya Kuroda Sextet, Corey King and Taffy and Akoya Afrobeat

You moved to NY from Kobe. How did you find it, moving to a new country and trying to find a place for yourself in the music community?

Being patient really helped me to get to where I am right now. It's been 10 years since I moved. Certain times after I graduated from New School, I didn't have much work. But little by little you get busier and busier. It helped me mentally to look forward to my future in NY and motivated me to stay there longer.
Another thing is doing your own project. It really really pushed me forward and inspired me. I didn't have a lot connections to the industry so I had to release albums by myself (3 albums so far).
By doing that, I learned a lot about booking. recording, promoting, leadership and writing. On top of all those things, to have your own album made me stronger as artist and just kept pushing me to forward in NY - the Mecca of music!
Who are your musical influences?
My first trumpet idol was Clifford Brown. Since I moved to NY, it's been Miles Davis and Roy Hargrove.
My writing influences would be Count Basie, Fela Kuti and Stevie Wonder.
What's in store for the rest of this year?
Well I'll be mostly touring with Jose. But I just recorded my own album last week in NY, so I'm looking forward to finishing the album and dropping it.