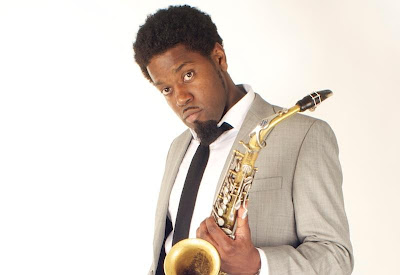 Soweto Kinch is known for being one of the most exciting jazz musicians operating in the UK, as well as one of the busiest. He is accomplished as a saxophonist, a rapper and a writer. He also runs events like The Flyover Show, works with choreographers and dancers and is involved in education through workshops and masterclasses. He's been the recipient of 2 MOBO awards and alongside all of this, holds a degree in Modern History from Oxford. All of this informs his work and results in an intensely interesting musician. This year, he was invited to be keynote speaker at the Leeds International Jazz Education Conference, held this week at Leeds College of Music.

Let's start with your keynote speech at LIJEC. What are you going to discuss?

I guess I'm looking at a number of key areas and issues. The broad thing is about pedagogy and about what my practice and process might impart to teaching methods. The key question is - what are we preparing jazz students for?  Often there are things that leave people feeling that jazz is a very esoteric, very exclusive pastime. If you look at the history of jazz, we have things like church music, which I guess our modern secular sensibilities mean we don't focus on as much. This music brought people together, essentially. If we look at issues of race and emancipation, jazz was crucial in challenging peoples self-perception. And it should be reclaiming that ground today, not just in terms of race but in terms of inequality. And finally dance, which I think is a very modern anxiety that we have. Sometimes students have an anxiety about dancing and their music being popular. and it really negates one of the most important aspects of the tradition. So I think philosophically we should approach the music afresh to make sure we aren't imparting our own anxieties and hang-ups on future generations of jazz students.

When you were asked to give this talk, did you feel an expectation to talk about certain things or approach things in a certain way?

I get a sneaking suspicion that they don't want the whole power-point presentation, erudite, lofty thing. I mean, I could do that but I think it's probably more about my practice and about my own methods and experiences. Especially this question of traversing modern genres. "Soweto will talk about how hip-hop IS compatible with jazz...or ISN'T compatible with jazz". The premise is very exciting for me to talk about on the one hand, but it also reminds me that we've got this binary way of looking at art.

You must be asked that a lot - this question of hip-hop and jazz.

The lunacy of it is I've been answering that question for 15 years as though it's a new thing. It wasn't new when I started doing it. There are lots of guys appropriating both art-forms well - people like Jaleel Shaw, Robert Glasper, Ambrose Akinmusire...The fact that it's still a question reveals more about our assumptions to do with class and race and populism vs. what is just art. We often presuppose that hip-hop audiences aren't erudite enough to understand our practice or that we'd be dumbing down by introducing turntables and beatboxing. Hip-hop is so much more than that.

And has your answer changed in those 15 years - do you think about it differently now?

I don't think I've changed the way I think about it - my answers vary in the levels of churlishness! Repeating the same answers is bemusing in that people still find it so strange. But on the other hand, the behemoth which presents hip-hop particularly, as something that it's not has only got more influential.

Do you think that those sorts of questions go some way to creating the issue in the first place, by misrepresenting or highlighting certain areas?

Honestly I think there are two ways of looking at it. The innocent way is that it's naivety - people that don't understand a culture so they stereotype it and believe that it's a threat. The other more sinister implication is really to do with power. If you look at the classical music industry - reviewers and publications are very protective of their identity, and it is defended in class terms." You don't have the taste or the sensibility to gain access to this world" and the same thing has happened to gentrified versions of jazz. You very rarely find a purely laudatory jazz review - they have to include something negative to appropriate their own philosophies. And in terms of different worlds breaking into that, that's where the territory and the power really comes into play. I noticed years ago this anger about Snoop Dogg coming into the UK to perform as though he was some huge threat. And also So Solid were banned from places all over the country  because there was a fear they'd spark some sort of gun violence. I think these fears and dangers are exagerated, really to keep venues and promoters in the hands of the same few small minded individuals. And to avoid the threat of a new demographic, racially and culturally, gaining access to this.