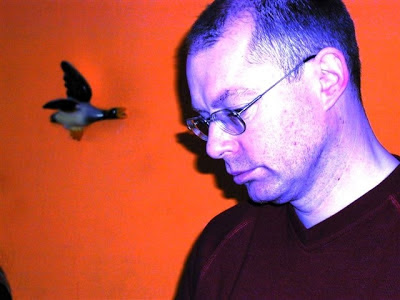 Described as "articulate and resourceful" (WIRE) and "a menacing intelligence" (NME), composer, performer and record label owner Martin Archer is constantly pushing his music forward, and leaving no stone unturned as he does it.

His group "Blue Meat, Black Diesel & Engine Room Favourites" has been chosen as part of Jazz North's Northern Line scheme, and his 40-piece experimental choir Juxtavoices performs across the country. He is currently working alongside drummer and composer Peter Fairclough to write a new album of material for long-time collaborator Julie Tippetts.


Your group was one of 12 selected to be part of Jazz North's Northern Line scheme. Tell me about the group and your plans for it.

I work in a lot of different music contexts, and for years now I've planned to make a group which puts my own sax playing back in the centre.  It's what I started out with and it's an aspect I've neglected to follow through over the years.  The AACM style always appealed to me, and it happened that I realised I was getting to know a number of musicians who would fit in with that style - that is, the ability to play with complete freedom but also retain a blues r&b feel to their improvisations.  The idea began when I did a gig with just me and the four percussionists.  After that I decided to formalise and record a piece based on the music for that gig, but with a larger sound palette.  Being able to include Laura Cole, Graham Clark and Corey Mwamba was the key to this, and I'm pleased they wanted to do it.
It will be hard to get work for a 10 piece band, so the Northern Line assistance will be very helpful.  I'd like us to do a small number of good quality gigs, and then make another record I think.

Lots of gigs and CD release with Juxtavoices.  A fourth album with Julie Tippetts.  More recording with my 2 rock bands, Orchestra of the Upper Atmosphere and  (Minnesota based prog-metal band) Combat Astronomy.  More electronic music in collaboration with Herve Perez. I'm also planning to record an album for choir and improvising group with electronics.
You often work in a musical style that features free improvisation, what do you think your role is as a composer/band-leader in that context - is it liberating or challenging?
I actually don't know why people think I'm a free improvisor.  I'm not, at least not on record.  I've made 40+ albums now of which precisely one is a free improv album.  I think of free improvisation as being a useful starting point for more developed composed music, and I like the idea of compositions which work on a fixed outline but leave much of the detail to the improvising skills of the players.  That's pretty much they way all my music has worked since the 1980s. As far as free improvisation itself goes, it's just another style to choose from, like blues or hard bop.  There's no magic about it, it's just a tool you can use.  But the more freedom you give to your players, the more liberating it becomes for me as the composer - the surprises they'll give me then feed back into better compositional ideas.
Do you write with specific musicians in mind?
Always. What they're likely to do with my material will always be more interesting than anything I might come up with. I think if you ask someone to play or record, you don't start then telling them how to play - you just accept what they do, and then erase it if you don't like it of course!
Posted by Editor at 04:33