Those of you who have experienced a RAMJam gig before know what to expect – tantalising tunes, raging rhythms and soaring solos – but for the uninitiated, find out by getting your tickets in advance from Victoria Hall Settle to experience these fearless young players together with Dales Jam, the well established community jazz ensemble, based in Skipton and now in its tenth year. Dales Jam will swell the numbers on stage to a total of about forty five players. One big sound!

As well as all this, you should not miss guest soloist Claude Deppa. A world class player on trumpet or flugel horn, Claude arrived in the UK in his teens from South Africa and has played with so many people, notably Chris McGregor, Grand Union Orchestra, Dudu Pukwana, Carla Bley, Miriam Makeba, that the list is endless. It will be a great rare treat to see him here.


On Tuesday afternoons since the end of January, anyone walking past Victoria Hall will have heard the sound of seventeen of Craven’s most adventurous young musicians following in the footsteps of the last five years’ RAMJammers. These young people have been endeavouring to break new musical ground, playing new grooves from around the world and honing their skills in composition, improvisation, and performance, while still having fun.

This has all been with the help of Musical Director Richard Ormrod, who was named Jazz Yorkshire’s Musician of the Year in 2012. He has been writing and arranging tunes for the players, based on individual talents and the music that evolves from the workshop sessions. RAMJam 2013 is part of the NYMAZ Musical Inclusion programme for North Yorkshire. NYMAZ provides high quality music-making activities for young people who might not otherwise have the opportunity. NYMAZ is funded by Youth Music. 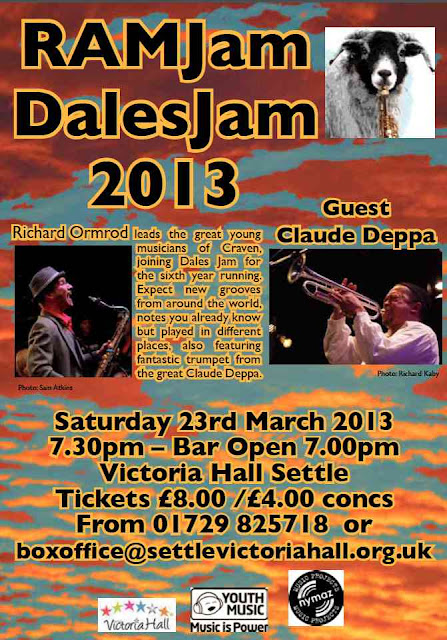