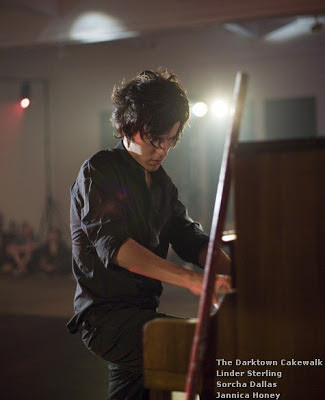 Pianist Peter Lee graduated from LCoM in 2008, moving to London to study his masters at the Royal Academy of Music. He now lives in London but travels across the UK and abroad performing, leading a double life as jazz musician/pop musician

You can hear the group here -


www.soundcloud.com/NarcissusUK
www.facebook.com/NarcissusUK
Ahead of his Sela gig with his new project, Narcissus on December 10th, we caught up with Pete to discuss the band, his writing and his work..

Tell us about your new project, Narcissus.

I started writing music for Narcissus around this time last year. I'd been stuck on a cruise ship for six weeks, and I desperately needed a creative fix. My final recital for The Royal Academy was looming - May 29th at The Vortex, London. I needed to come up with something more than just a band playing a few of my favourite tunes. As you've put it, I needed a "project" - a concept.

I decided to come up with a band that fused the things that were going on in my life at the time. I was playing loads of jazz in college, and then going out and playing lots of commercial gigs - lots of pop stuff. So I wanted to bridge the gap between these two avenues. When I look back to writing my first composition for the band "Writer's Block", I can see that's really what I was going for. It has the kind of form that you'd find in a pop tune, but uses harmonic language from contemporary jazz. I also decided to incorporate my interest in mental health and the human psyche. This is something I've found really fascinating since my teens.
Another important factor for me is that we play my compositions without reading music. If we were reading, the parts would be about 12 pages long, and our audiences would consist mainly of Green Peace protestors. This has meant we've needed to internalise everything. This way, when we make a change in rehearsal, then it simply needs to be discussed - rather than having to amend constantly parts. Between February and June 2012, we rehearsed twice weekly - Ali even making the journey down from Leeds to London every week. At first I thought he was just being a great mate - but actually, he was really into the music. Brilliant. The guys in the band have been really enthusiastic from day one.
Since the recital, we've recorded an EP and shot a video with the help of Harry Foster, Amy Maguire and Joelle Green. The video's been an amazing tool to help show what we're all about - it's definitely something you can expect more of! Thanks to the video, a producer at Jazz FM picked us up and gave us our first radio play.
Apart from Narcissus, what else are you involved in at the moment?

Well, my band Narcissus is certainly my main creative output at the moment. I really want to put all my focus in to it. But while it's in its early stages, I have to go on making a living as a musician. I love to teach. I recently tutored on a lovely jazz course based in Northamptonshire, called "What's your story". The idea was that musicians could get together and share their perspectives about music, whilst rehearsing, composing and jamming. I also teach on the jazz department for the Music 4 People Summer School every year in August. Both of these courses are mainly attended by adult learners, who arrive with shed loads of enthusiasm and hopefully leave with some great new ideas. It's also a chance for me to get to know other tutors who have their own bands and are getting involved with their local jazz scenes.
I play in function band The White Keys, which has been up and running for around 4 or 5 years now. I absolutely love it - musically it's really shaped the kind of music I like to write and listen to. I've learnt that my sense of enjoyment, and how much I value the kind of work I'm doing, is all dependant on the amount of dedication I'm willing to give. It would be easy to turn up to a wedding with a scratch band, half of whom didn't know their parts. The White Keys go all out on every gig. I adore it. I even used the musicians from this band to form Narcissus!

When you write, do you have a method for composing - do you write with specific musicians in mind?
What's important to me at the moment is that I have a lot of ideas about the what I want to write before I make a sound!
As I mentioned earlier, I have a broad concept for the group of compositions I'm writing. In the case of "Narcissus", it's "things to do with the human mind". Now I need to be a bit more specific when writing a particular tune. So I've brainstormed some ideas that both interest me, and adhere to the band concept, and I've made a list of them on my phone! Now the question is, how can I translate an abstract idea into something musical?
Let's use The Ego as an example. From my limited understanding, the ego relates to one's own self identity. I immediately think of someone looking at themselves in the mirror. Mirror images in music can be used in lots of ways. Palindrome can be a really interesting compositional tool. I wrote a piece that featured a palindromic 4 bar groove. Each part was the same backwards and forwards from a mid point, as though you wrote some music, and placed a mirror after it. I may also use palindrome to affect the form of your composition - ordering the different sections of your piece accordingly. Of course, the most challenging thing, is that the piece you write sounds good!
I also think about style before coming up with a tune. And this can be influenced by the theme for the piece too. I always think of the Ego is quite an ugly feature of human nature. I'd have to get some dark harmonies in there! Something that sounded self assured - a punchy bass line maybe!
It's critical to write with specific musicians in mind. I have to be careful not to give them too much detail, and to allow them creative freedom within the structure.

What are you listening to at the moment - do you have a favourite artist or album?
I love the music of piano player Gwilym Simcock. I love the detail that he goes to in his music. I've been lucky enough to have had lessons with him over the last two years and seen him live in loads of different settings.
I recently saw 3 big gigs at the London Jazz Festival all in the space of a week. Herbie Hancock, Brad Mehldau Trio and Chick Corea Trio. For me, it just reminded me how much I love Brad's playing. I find his playing so much more introspective and mature than the other two. Herbie had about 5 keyboards, 5 iPads, an iMac, and then at the end of the gig he took off in a jetpack. Brad is the master for me.
What do you like about the Jazz scene in Yorkshire - what makes it unique?

Well, I spent four years in Leeds where I studied at the music college on the jazz course. I have extremely fond memories - particularly of individuals who inspired me to play and work hard. Jamil Sherif, who leads the course now, was a major influence on my approach to writing and to improvising. There's so many other amazing musicians there too. I guess that's the most important thing when talking about a "scene" - the individuals that make it up. There's plenty of really individual sounding players. There are many young musicians who are providing playing opportunities, by getting in touch with venues and running jazz nights. This is vital for the scene.

We've got a gig on the 10th December '12 at Sela bar in Leeds. Hugely looking forward to it!