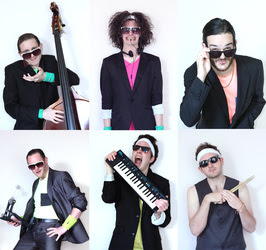 Any group of musicians, who name themselves after a fictitious area of the brain from the television series “Brass Eye”, out of the mind of Chris Morris, must come with a series of very welcome preconceptions. Shatners Bassoon is essentially a group of Leeds based improvisers/composers who, since 2010, as graduates of the Leeds College of Music, have been performing and collaborating under the influence of artists such as Frank Zappa, John Zorn and Mike Patton. It would be misleading and reductive however to label this collective as reproductions of those influences. “Aquatic Ape Privilege” is their forthcoming release, and three tracks are available to hear on the website Soundcloud as taster of their efforts.

“This Is How You Make A Buck” opens with a flurry of electronic scurrying, before a frenzy of scathing electric guitar, voice and saxophone cut through the chaos. The piece takes then on an air of sinister controlled pandemonium, punctuated by hysterical saxophone, guitar and keyboard passages. Certain elements of this piece are whimsical and eccentric and somehow reminiscent of early Soft Machine or Henry Cow, which may help anchor the music down for the passive listener. With the nine minute “This Is How You Make A Buck” drawing to a close in a more pastoral frame of mind, the next composition available to preview, “Leland” is all together more sensitive with skittering saxophone skirting gracefully, yet ominously, over the gentlest suggestion of keyboard, percussion and electronics. This then meanders into the final piece “Someone Killed My Panda” which continues to unsettle the listener with the merest hint of piano sprinkled over an ambient soundscape of brass, bubbling electronics, percussion and delirious spoken word passages simmering under the surface. The effect over the nine minutes is one of unease and perplexity, until the final few moments descend into a maelstrom of sound.

The three tracks available to review indicate a group of musicians deconstructing composition and improvisation and developing a sound which is entirely of its moment and its surroundings. It may not appeal to the casual listener on first exposure, but for the listener who is willing to explore sound and methods of producing music, the album release next year will be symptomatic of what freedom of thought and musical instinct can create.