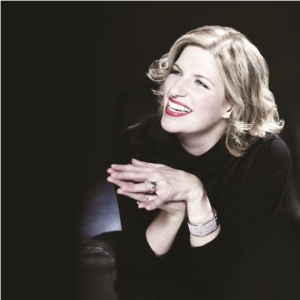 On October 30th, singer Clare Teal will take to the stage of the Leeds Town Hall to play to a 1,200 strong audience with her newest project - a specially formed community big band.

The event, which will feature special guests Olly Murs and Gregory Porter alongside Teal and the band is supported by the BBC and will be aired as part of BBC's Children in Need next month.

Jazz Yorkshire spoke to Clare about the project and her love of big bands...


How did this big band project come about?

It was quite by chance, actually - at the Yorkshire Awards last year, I was sitting at the BBC table and I was sitting next to the editor and we were talking about all of the music projects that BBC and BBC Leeds have put on - it's obviously difficult at this time, with arts budgets being cut - and we were talking about music in the community and how important it is.Since I deal mainly with Big Bands in my work with BBC, she was asking me about those and we kind of came around to the idea that we could do something with these ideas - that's how Build-A-Big-Band came about.

Tell us a bit about the process of putting the big band together.

We held auditions at Leeds College of Music. I was worried that no-one would come, but BBC Leeds were really behind it - they had a big band day for the press - I was picked up at 6.40am and didn't get leave til 6.40pm. I did 12 hours of interviews, I did every radio show and Look North as well - they played Big Band music all day and it was on every news bulletin. You think, my goodness - if other people could do this for niche market music like jazz or folk, just now and again.You know, nobody rang in and complained! It was a lovely experience. And so, through that over 200 people turned up. The audition process is quite intimidating and so I have the utmost respect for those hardcore people that made it through.

How have rehearsals been going so far?

We've had two sets of rehearsals so far and it sounds brilliant. I love the mix of musicians we've got - the youngest is 14 and the oldest is 61, plus one of the soloists is 75. I think  the mix of ages that we have give the band quite a unique sound. Having worked with big bands all over the world, what's astounded me with these guys is the thirst for knowledge and the willingness to make it as great as they can. We've matched up each section with some great musicians who are also great educators, like Martin Shaw and Ben Castle from the BBC big band. Really, there has not been one negative aspect in this whole process.

What sort of material will the band be playing at the concert - how did you choose the music?

I'm a big believer that big bands should also play pop music because they played pop music when they first started. So I tried to choose some tasteful charts that give a nod back to the greats like Count Basie and Ellington, the great big band eras of the 50s. Then there are a couple of more "serious" instrumental pieces, for example some Kenny Wheeler. All the pieces I've chosen to sing intentionally aren't old-school - I won't be doing any standards. All of my songs will be popular songs from the 60s to the 90s, just to add a different flavour to the concert.

The guests we have, for example Olly Murs, is a pop musician. And his material just goes to show that song with a horn section playing even simple motifs can be opened out and adapted for big bands. In fact, the band have had the opportunity to play a single that hasn't been released yet, which is quite exciting!


What's next for you and the band?

Well I'd love to work with these guys again. It's fantastic to get something like this off the ground, but of course it's difficult to keep it going. But at the very least, the older guys in the band have gotten something out of it through working with the music they've loved all their lives and I hope for the younger ones it's helped them to decide on things they would like to work on in the future. To sell out a 1,200 seat venue for their first gig is pretty special.