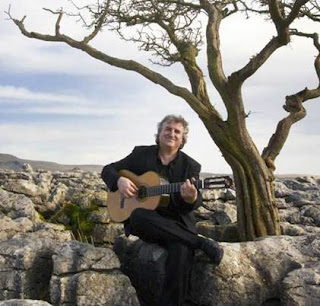 Eduardo Niebla, internationally acclaimed guitarist and composer has invited 40 members of Ewa Salecka’s York based choirs to record on his new album this coming Saturday 20th October at his North Yorkshire studios near Melmerby, as well as 25 young singers from Ackworth School near Leeds who will record their parts on 3rd November.


For these choirs Eduardo has prepared several compositions, two of which he performed at the Queen Elizabeth Hall on London’s Southbank in 2011 & 2012 with the Pavao String Quartet and Queen Mary’s School choir from Yorkshire, and the others are revisions of pieces he wrote back in 2007 for choir, church organ and guitar.  Quite a development one may think for a flamenco jazz guitarist who rose to fame busking in the streets of Covent Garden in the early 80s, but Eduardo’s explorations into classical music started at the outset of his career with his acclaimed symphonic rock band Atila in Spain, whose influences included Bach, as well as Hendrix.  Eduardo later formed a group with musicians from the London Philharmonic and the Boston Symphony Orchestras whilst in London and began writing music for orchestras, plays and films.

His own guitar style, developed over the last 4 decades, has embraced the lyricism found in classical music and these new recordings celebrate this on a huge scale with tremendous bass lines contrasting with chanting voices, soaring melodies, strings & church organ, and all the while Eduardo’s exquisite guitar fires with flamenco jazz brilliance.

This new recording, Eduardo’s 24th cd – yet to be named, will be released early next year.

Since his move to Britain in 1978 Eduardo has collaborated with major artists across the globe including Nishat Khan (sitar), Wajahat Khan (sarod), Adel Salameh (oud), Lol Coxhill (saxophone), Deepak Ram (bamboo flute), Paban Das Baul (gypsy singer & percussionist), the Dante String Quartet, George Michael, Craig David and recently Ben Watkins of Juno Reactor (composer of the music for the Matrix films).  He was introduced to recording by Tom Newman and has written music for films, documentaries and plays, including for the BBC, and composed music alongside poets Fran Landesman, Mike Horovitz and Ian McMillan.

Eduardo has recorded for BASF, EMI Odeon, Venture Virgin, Jazz-Point and Riverboat Records. Latterly he has produced his albums at his own recording studios in North Yorkshire including “My Gypsy Waltz” which he launched to acclaim at Celtic Connections Glasgow and the Queen Elizabeth Hall London last year:

“His latest album demonstrates his fluid, technically brilliant guitar work… and the standout track is the 18 minute India, a series of meditations on poverty and resilience, in which lyrical, drifting guitar passages are matched against rousing interplay with Srikanth’s violin… the exuberant title track…(and) the thoughtful and lyrical Rosie is another reminder of Niebla’s exquisite guitar work.” (THE GUARDIAN)

Eduardo’s career started from very humble beginnings – born in Tangiers Morocco to Andalucian parents in 1955, the 7th of 11 children and mythically the 7th son of the 7th child.  In 1960 after political tensions the family became refugees and settled in Girona, Spain where Eduardo grew up.  At 18 he formed the cult symphonic rock band “Atila”, whose albums are now serious collectors’ items, and was rated alongside Paco de Lucia as one of the best guitarists in the Hispanic Peninsula.  In 1975 he moved to Paris, where he performed in several exhibitions of conceptual art with the painter Jaume Xifra. In 1978 he reached London, initially as a stepping stone to fly to America, but never left and has since been regarded as one of the outstanding guitarists of his generation.  He currently lives in North Yorkshire where he has his recording studio.
“A display of supernatural talent….and a spellbinding mixture of flamenco and modern jazz, bursting with passion & verve.” (The Spectator)

“Niebla proves his mastery & composing genius with every touch.” (Die Rheinpfalz)
“No recording can do full justice to the thunderstorm of this musician in full flow – deep booming chords interspersed with lightning percussive effects… his language is full of hot, dark, Mediterranean passion.” (Scotsman)

“Eduardo – virtuoso?  Inventive improviser?  Yes and yes.  And creative composer too.  Writer of beautiful melodies, great grooves… he cast a deep engrossing spell over the audience which transported them to other places, to the distant past, to India, Arabia, North Africa, Spain – tracing the link between modern Flamenco and the ancient music of India.  And then on to the New World, to South and Central America for the rumba.  At the end of the concert he thanked the audience for having been present while the band “searched for those deep places in the music.”  Believe me they found them.  (Rodd Fogg, London Jazz 2010)