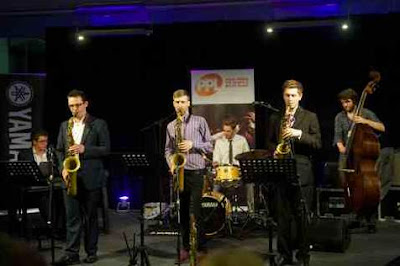 Jonathan Davis is the latest in the line of LCoM students to be awarded a prestigious Yamaha Jazz Scholarship. Drummer Jonathan was presented with the award at the All Party Parliamentary Jazz Appreciation Group's annual ‘Summer Jazz’ event in London. The prize consists of £1,000, CD recording and performance at London's 606 Club on 5 December.

UPDATE (from Chris de Saram, Wakefield Jazz) "Yorkshire and Wakefield connection with Matt Robinson (piano - Royal Academy) and Ben Mallinder (tenor - Trinity Laban). Those last two were both brought up in Wakefield and had played for Wakefield Jazz many times before and during their student years. Along with Reuben Fowler (trumpet - Royal Academy), also a Wakefield lad and 2012 Kenny Wheeler Jazz Prize winner . "They were an exceptional trio of local musicians often joined by Wakefield's bass-playing Tom McCredie who went on to study at Birmingham Conservatoire and then Royal Academy."
All together (with Nick Svarc) playing at the Grove 3 years ago on www.youtube.com/watch?v=clp_fNCcMtI
See report from Jamil Sheriff who attended the event. news/yamaha-jazz-scholars.php
Posted by Jazz North at 04:55